You are at:Home»Science»The Evolution Of Economy Or Degradation Of Environment?

We cant blame economy, neither we can praise Nature. We cannot judge the better side of the coin. Let us now recall those CFC emitting from automobiles refrigerators, hazardous Sulphur particles washing away Taj Mahal’s beauty over time by acid rain, steady waste addition into the rivers every minute, Icebergs and Icy mountains melting due to Global Warming and Islands submerging due to unstable aquatic conditions. E-Waste generating in China, household plastic waste in US and Global inflation and recession are just handpicked-from-the-Earth examples that can satisfy the alarming rate of depletion of resources. Population, Habitation, Civilization, Wealth, Culture, Trade, Collaborations, Liberalization, Reformations, Disputes, Manufacture, Production, etc. are one of the thousands of words that have shown significant increased ratio over preceding years. All these factors are not just tributary but directly points out the reason of economic expansion with limited sources. Following are the views of some of the senior authors @ Durofy. 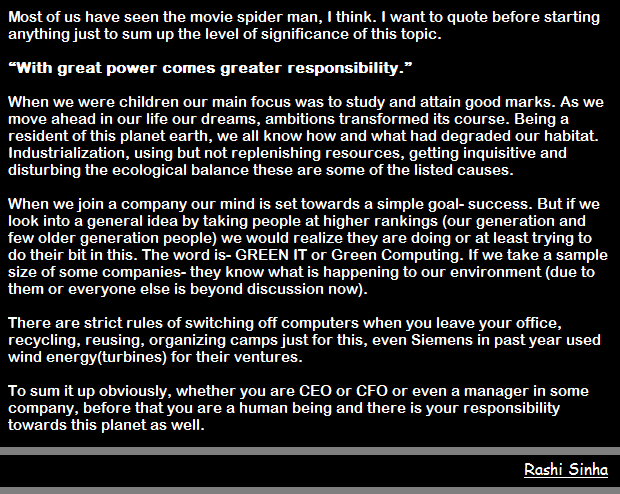 The people/tribes living in the areas where trees are stumbled down and minerals depleted are not given any credit from anyone. Majority of Managers employ those people, use their resources, and pay them just enough for their daily food and shelter! (They cant even buy their own products!!) This really is shocking when we compare it to their own egoistic needs and resources that we use in daily lives. We use toxics, chemicals and drugs for manufacturing, but how about TITO (toxin in, toxin out)? Let us have a look at these few points:

1. In past 2 decades, 1/3rd of Earth’s natural resources have been consumed by us.

4. 99% of the things manufactured in US is trashed after 6 months.

5. An average person passs through 3000 advertisements per day in US

6. Dioxin is the most toxic man made chemical known to science. They are primarily mad by incinerating waste.

There are six septillion things going on at the same time. That’s a six with 24 zeros after it, okay, going on right now. Right this instant, as you sit in your chair and then in the next instance…within 1 0 seconds, a hundred more things have happened than in all the stars and planets and asteroids in the known universe in your body, and that is called life.

The tragedy is that it was the human mind that is the key to our very survival. The human mind invented the concept of a future and we’re the only animal on the planet that actually was able to recognize we could affect the future by what we do today.

One of the most serious consequences of our actions is global warming. The danger is that the temperature increase might become self-sustaining, if it has not done so already. Drought and deforestation are reducing the amount of carbon dioxide recycled into the atmosphere.  And the warming of the seas may trigger the release of large quantities of CO2 trapped on the ocean floor will reduce the amount of solar energy reflected back into space and so increase the temperature further. We don’t know where the global warming would stop, but the worst-case scenario is that Earth would become like its sister planet, Venus with a temperature of 250 centigrade and raining sulfuric acid. The human race could not survive in those conditions.

It is happening even faster than the scientists have estimated! In few decades, Artic would be ice-free.

People didn’t talk about asthma decades ago. I can walk into a classroom in an elementary schoo and ask the kids, “”How many of you have asthma?”” Thirty percent of the kids in the room will have their hands raised. At least 30. ln some classrooms, it’ll be 60 percent.

What we don’t see or think about when we look at a tree is: What’s the volume? How much water is contained there? Turns out to be 57,000 gallons of water in a 1 0- to 1 2-inch flash flood. lt can grab that much water, prevent it from running off captures it in that sponge, cleans it, puts it back in the aquifer. Take that one tree away and you got a flood, you got soil erosion. You’ve lost those 57,000 gallons from the local water supply. Then that water is rushing downstream, hurting people, hurting communities ultimately polluting the ocean.

l think the most basic thing to understand about our global economic system is that it’s a subsystem. And it’s a subsystem of a larger system. The larger system is the biosphere and the subsystem is the economy. The problem, of course, is that our subsystem, the economy lt’s all set up to grow, to expand whereas the parent system doesn’t grow. lt remains the same size. So as the economy grows, it displaces, it encroaches upon the biosphere, and this is a fundamental cost. This is the fundamental opportunity cost of economic growth. That’s what you give up when you expand, what used to be there.

↑ Herman Daly – professor at University of Maryland, College Park, former Senior Economist in the Environment Department of the World Bank

Pursuing MBA from Symbiosis Inst. of International Biz and member of The Entrepreneurship Cell. A die-hard Barcelona fan and a never-getting-old Football fad. A gourmand of mature taste with immature cultures. SAP ABAP, PHP, DRUPAL and WordPress skills. Dirty hands with android games and all-time-high ears with Dubsteps and Raps songs.