You are at:Home»Lifestyle»30 Facts About Sleeping You Probably Didn’t Know

Sleep is a part of mental state sub consciousness where brain is willing to take rest after prolonged hefty work. This may be in night or day or mid noon or whenever you and your brain chemistry works together. In words of Wikipedia, Sleep is a naturally recurring state characterized by reduced or absent consciousness, relatively suspended sensory activity, and inactivity of nearly all voluntary muscles

Before bracing up with 30 sleeping facts below, lets get you acquainted with few words:

Insomnia, or sleeplessness, is a sleep disorder in which there is an inability to fall asleep or to stay asleep as long as desired.

normal stage of sleep characterized by the rapid and random movement of the eyes. Criteria for REM sleep includes rapid eye movement, low muscle tone and a rapid, low-voltage EEG

A hormone secreted by the pineal gland that inhibits melanin formation and is thought to be concerned with regulating the reproductive cycle. In nutshell – – – it is helpful during sleep. 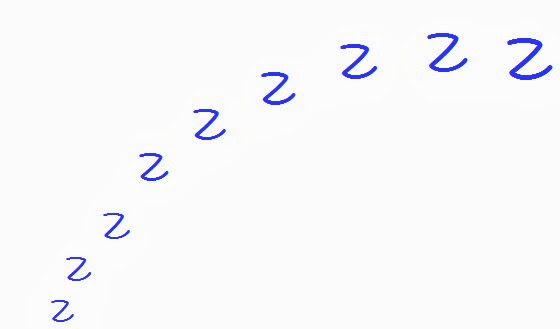 83 are found inside Disney’s Sleeping beauty.

REM sleep is believed to have appeared 50 million years ago but it had continuous amendments during evolution.

But who invented computer’s RAM?

People waking up during night are found to be much smarter than people sleeping during nights. However, their health factor decreases considerably as compared to slumber.

I am studying during night times. I am more genius than a class topper; dont say this to your faculty ever.

There is a reason why people say that horses have iron legs.

DO NOT PANIC. There is a way: don’t sleep for 6 years.

Toddlers and teens, both need same amount of sleep – 10 hours a day. This explains the reason why they feel sleepy during class hours

Excuse me Ma’am….i am a teen, dont you know they sleep like toddlers?

During sleep, you eat approximately 12 spiders in 1 year.

That true and if you don’t believe, put a spy camera for 1 year. Well, that are not large sized spiders but sometimes spider eggs or toddlers.

You dream about the faces you have seen. Blind people involve emotions, smells, touch and sounds.

Is this the real life? Is this just fantasy?

Caught in a landslide…No escape from reality

Giraffes sleep only 2 hours a day in 5 to 10 minute sessions. Koalas and Tigers are the longest-sleeping mammals that sleep up to 22 hours a day.

You may stroll down the forests when “the tigers sleep”.

The most common activity before bed is watching TV. This is common all over the world which is nothing but a mental infatuation towards a specific sitcom or  any TV serial.

You can do anything else………..ANYTHING :D

In the United Kingdom almost one-third sleep naked. I have not seen anyone, but thats what study says.

This is what study says, because they have watched all of them.

Fish sleep with open eyes. Generally, they have an extraordinary eyelid which is transparent.

Dont start panicking if you see your fish dead.

Somniphobia is the fear of sleep.

I wonder how their brain works!

people sleeping only 6-7 hours every night have longer life expectancy than those who sleep 8 hours per night.

Congratulations! Have a cigarette and sleep for 6 hours a day.

You snore only when you sleep in non-REM mode.

Remember the last time you snored? The one sleeping besides you does.

If you flash a bright light at the back end of the knee of a sleeping person, their sleep-wake clock resets.

Start your own factory that produces bright lights!

During non-REM sleep, elephant stands and during REM sleeps, he lays down.

The day when Earth stood still.

Some people can take cat naps with their eyes open.

Now you have some good excuses for your Boss.

Avoid yourself watching porns and sitcoms.

You sleep deep after 2 hours of sleep.

Some people sleep deep after 2 seconds of sleep.

Cooler atmosphere helps in sleeping quickly. You should take a bath and got to bed.

It directly depends on your living standards and thought process of whether taking a bath will make you sleep better or not.

Brain never sleeps. When you sleep, you are actually giving rest to your brain.

Whales and dolphins have an ability to fall half asleep. They can reverse the brain hemispheres so that they can continue to surface to breathe.

Zombies on the sea too?!

Insomnia is twice as common in women than in men.

It is Men who works hard, not Women.

People who does not dream are victim of multiple personality disorder.

Google about it. You will find some cute facts.

Flip horizontally means you are boring, flip vertically mean you are not.

You will not die from starvation but may die from sleep deprivation.

Someone died and wrote a thesis.